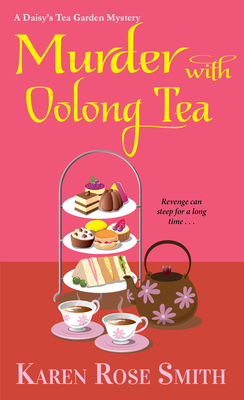 First Line: "'Claudia never should have been hired,' Althea Higgins proclaimed loudly enough for everyone in the teachers' lounge to hear."

Summary:  Althea Higgins is an English teacher at Willow Creek High School.  She has been teaching for many years.  In fact, Daisy Swanson, co-owner of Daisy's Tea Garden, was taught by Ms. Higgins when she was in high school.  Althea has a lot of opinions and isn't afraid to spout them.  Daisy is consulting with the principal at Willow Creek High School on the menu for the upcoming spring tea when she overhears Althea ridicule a new teacher.  She is not the only one to hear her remarks.  There were plenty of people in the teachers' lounge including the teacher she was ridiculing. In addition to this, the school board will soon be voting on implementing uniforms at the school.  Althea has been very vocal in support of the policy.  While many others are opposed.

The tea is being held after the spring concert in recognition of the teachers' hard work.  Daisy and her staff have things under control.  Daisy has created a new tea blend that she will be serving at the event.  It is Oolong tea with hints of lemon and vanilla.  Things are going smoothly, but the refrigeration unit in Daisy's van has been acting up.  She slips away to check on it and bring in some more food for the event.  As she is hurrying back inside, she is assaulted by an ear-splitting scream.  It sounds as though it is coming from the pool.  Daisy runs toward the scream and discovers Althea Higgins floating in the pool with a partition rope wrapped around her neck.  One of the school's counselors is entering the water to try to save her.  Daisy joins her, but they are too late.  There were plenty of people that Althea angered, but who was angry enough to strangle her?

My thoughts:  The characters in this series are like old friends.  I always enjoy catching up with them. The only downside was that Aunt Iris didn't make much of an appearance this time.

There is plenty going on in Daisy's world.  Vi and Foster are new parents and are figuring out how to manage their marriage along with a new baby.  Added to this are financial concerns.   Daisy is there to encourage them whenever she can.  Jazzi has a new friend that she would like to invite to stay with them during spring break.  Her parents will be out of the country and Brielle doesn't want to go with them.  Daisy has not met this friend or her parents which makes her hesitant to say yes.  However, Jazzi usually has good instincts in regards to friends. After a quick conversation with Brielle's parents, Daisy decides to allow her to stay.  We are introduced to Brielle's grandma, who is a likeable character that I hope to see more of.  Jonas is still working through some things in his life and when Daisy interferes, things get rocky.

The mystery kind of took a back seat to the other things going on in Daisy's life.  There weren't any solid suspects until the mystery was almost solved.  A few twists and red herrings kept things interesting. But, once it was evident who the killer was things wrapped up quickly.

This was a nice addition to the series.  There was growth in Daisy, Jonas and other characters which was good to see.  And as always, recipes are included for some of the things Daisy serves at the tea garden.