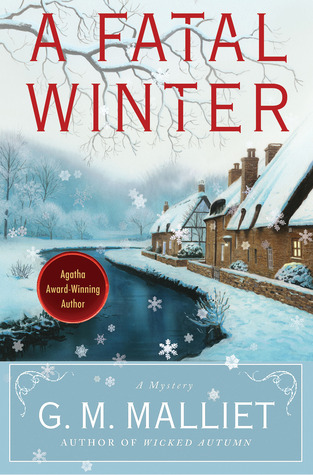 First Line: "Oscar, Lord Footrustle, was in his castle, spying from the squint in his private chamber overlooking the Great Hall."

Summary:  Father Max Tudor is looking forward to returning to his home in the quaint village of Nether Monkslip and carrying on all the traditions that come with the advent season.  He has been in London speaking at a symposium on the preservation of British churches.  The train ride will be several hours, which gives him time to decompress.  However, it was not to be.  As he walked into his train compartment he was followed by an elderly lady whose accent reveals her upper-class status.  Lady Baynard has a quick mind, full of thoughts about herself that she takes pleasure in sharing with anyone who will listen.

Lady Baynard, Leticia, lives at Chedrow Castle with her twin brother, Oscar, Lord Footrustle.  Oscar has decided to extend invitations to his family to come to the castle for a visit.  He and Leticia are getting older and are often lonely.  However, his children and nieces and nephews can hardly stand to be in the same room with one another.  But, each one wants to remain in the good graces of Oscar, so they begin arriving at the castle.  The air is thick with animosity and it is not long before death arrives at the doorstep.  Lord Footrustle has been stabbed to death in his bed.  Upon hearing the news of the death of her brother, Lady Baynard succumbs as well.

DCI Cotton has been assigned to the case and wastes no time in contacting Father Max.  He dispatches Max to the castle to support the family, plan the funerals and snoop around while he is at it.  Suspects abound, but can Max pinpoint who had enough malice to kill Oscar?

My thoughts: A murder at a family gathering in the English countryside inside an ancient castle?  What fun!

Max Tudor, former MI5 agent, entered the priesthood to get away from the lies and violence that surrounded his former life.  However, he doesn't mind using his skills to help local law enforcement on occasion.  His profession as a priest often causes others to open up to him.  In this way he is able to learn information that law enforcement would not be privy to.  This is exactly what DCI Cotton is hoping when he sends Max to Chedrow Castle.

As Max begins meeting the Footrusle family he realizes there is not much love between any of the members.  The family consists of Jocasta Jones, daughter of Lord Footrustle by his first wife, and her husband Simon.  Jocasta and Simon live in Hollywood, CA where Jocasta is an actress and Simon is her support.  Next, we have Gwynyth, the second, much younger wife of Lord Footrustle.  They are also divorced, but have two children, twins Alec and Amanda.  The twins are fourteen and barely know their father.  He has never taken much interest in them.  However, Alec is the heir to the title being Oscar's only son.  Gwynyth doesn't have much time for her children either, as she is so busy spending the money Oscar gave her.

Lady Baynard, a widow,  had three children and an adopted grandchild.  Her oldest son is Randolph.  He is a photographer, which his mother sees as no kind of job for a Viscount.  Her next child was Lea.  Lea and her husband were killed years before leaving behind Lamorna, their adopted child.  Lady Baynard has grudgingly taken in Lamorna.  She tried her hand at mission work, but when that was finished she had no where to go.  In order to save herself from embarrassment, Leticia gives her a place to stay and keeps her busy with servant's duties.   Lester is the youngest son and he is married to Felberta.  The pair is known as Lester and Fester behind their backs.  There is not one person in all of these relations that has anything nice to say about another.  This is handled well by the author.  Many of these characters seem almost cartoonish.  Just when the degradation of one another was getting to be too much, the author would move us to something else.

The mystery was complex.  On the surface the motivation seemed to be greed for Oscar's money.  But they were all greedy.  I enjoyed the way DCI Cotton and Max worked methodically through the case.  They would interview someone and then discuss what they learned, what that told them and who to interview next.  When Max finally figured out who the culprit was, he gathered all the family members and staff together and confronted them, just like Hercule Poirot.

There are lots of literary references in this novel, which was a lot of fun.  There is also plenty of humor, which lightens things up.  Most of the story takes place at the castle, so it was a nice change when Max was back in Nether Monkslip and we got a glimpse of life in the village.

There is some language in the book.  It is mostly by one character and only a couple of instances.

I really enjoyed this second book in the Max Tudor series. It contained a great mystery, interesting characters, a fantastic setting and a little bit of romance.  I look forward to another visit to Nether Monkslip.

"Robert Louis Stevenson had written something about the heart being full of the stillness of the country, and that was what Max felt on a train.  Even short delays en route didn't bother him.  So long as he had something to read or something to gaze at out the window, he was renewed in spirit by the enforced stillness, even though his mind might be racing."

"The weather cooperated, but grudgingly.  The South West of England boasted a temperate climate that since time immemorial had drawn visitors to its shores, and this record for scenic hospitality was only now being threatened by the caprices of global warming.  The area still enjoyed what the locals called 'rainfall on tap' - rain when needed, sun when not - and the deep soil of the region meant not only good planting but good grazing for much of the year."