Book Review: Under the Cajun Moon by Mindy Starns Clark 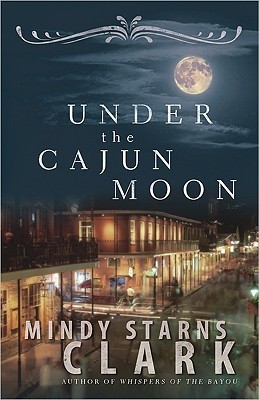 First Lines:  "Ringing.  Something somewhere was ringing and just wouldn't stop.  Slowly.  I opened my eyes."

Summary:  Chloe Ledet, international business etiquette expert, receives a phone call from her mother indicating that her father has been shot.  Chloe catches the first flight from Chicago to New Orleans.  After arriving in New Orleans she receives a call from her mother telling her that while her father was conscious he indicated that he needed Chloe to handle an important business matter for him.  Her father is the famous Julian Ledet, chef and owner of Ledet's Restaurant in the French Quarter.  Chloe is anxious to get to the hospital, but agrees to handle the business transaction first.  She is to meet their lawyer at the restaurant and sign some paperwork regarding a property he is buying.

She wakes up in a hotel room with no memory of how she got there.  The phone ringing wakes her up, but not in time to answer it.  Soon, someone is knocking on the door.  It is the police who received a complaint about noise.  Disoriented, she lets the man in.  He soon discovers a dead man on the couch in her room.  Chloe realizes that the dead man is the lawyer she met at the restaurant last night.  Did Chloe kill him?  She doesn't think so.  If only she could remember how she got to this hotel...

My thoughts:  This was such an engaging read and hard to put down!  There are two parallel storylines in this book.  The first is the present day story involving Chloe.  The second takes place in the 1700's in France involving Jacques, the son of a goldsmith.  Jacques' storyline is secondary, but it relates to Chloe's story and is inserted at just the right time to add to the tension.

Chloe is a complex character.  She grew up as the only child of Julian and Lola Ledet.  Julian was the famous chef and Lola was the hostess at the restaurant.  Chloe always felt left out and overlooked by her parents.  When an old friend, Travis Naquin, shows up and begins helping Chloe, she is relieved, but suspicious.  Travis is the grandson of one of her father's friends and comes from a tightly knit, large Cajun family.  Through his character I learned so much about Cajun culture.  I enjoyed getting to know them both and watching their relationship grow.

The mystery is twofold.  One part is whether Julian Ledet was shot accidentally or on purpose.  The second part is who killed the lawyer and tried to frame Chloe.  Solving the mystery involves solving a riddle.  The riddle was written by Julian and hung on the wall of the restaurant.  It involves treasure, swamps, snakes, friends, family and enemies.  It involves learning who to trust and trusting even when you are not sure you should.  It is complicated, but fortunately it is all sorted out at the end.

The secondary storyline involves Jacques.  He is helping his dying father complete a goldsmithing job ordered from the palace itself.  Jacques must keep his presence undercover, because part of the agreement with the palace was that only his father would know about the work.  But, his father is growing weaker and found that he can't complete the job alone and so contacts Jacques for help.  As this story progresses we see how it relates to Chloe's story.  It was very interesting to learn about goldsmithing and the hard work and precision involved.

This was an engaging mystery, full of complex characters and interesting places.

"Papa didn't like the man much, as he felt he was all show and no substance, a flatterer of kings who was always last to do the quiet, thankless jobs of the guild but first in line to hold up a corner of the royal robes during processionals."

"He went on to explain that coastal Louisiana was full of underground salt and that in many cases a single salt dome might extend two or three miles out - and up to eight or nine miles down, whether it was obvious at the surface or not."

"As an expert in etiquette, I didn't comment, but I couldn't help thinking that Travis' chivalry might fly here in the South, but if he insisted on holding doors and pulling out chairs in certain parts of this country, his actions might be misconstrued as condescending or even disrespectful."