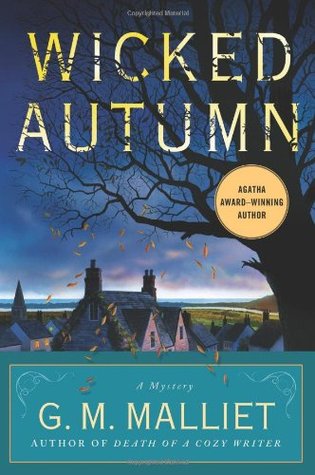 First Lines:  "Wanda Batton-Smythe, head of the Women's Institute of Nether Monkslip, liked to say she was not one to mince words.  She might add that she was always one to call a spade a spade, and that what more people needed was simply to pull their socks up and get on with it."

Summary:  Max Tudor, former MI-5 agent,  just could not abide living lies any longer.  He left MI-5 and began the process of becoming an Anglican priest.  He is settling in to his role in Nether Monkslip, a small village about two hours from London.  Aside from the fact that most of the women in the village have tried to remedy the problem of the handsome, single vicar, things have gone well.  Max has been accepted by the village and has enjoyed getting to know the residents of Nether Monkslip.  He has especially enjoyed the isolation of the village that allows one to lead a quiet, simple life.

That is, until Wanda Batton-Smythe crosses your path.  Wanda is head of the Women's Institute and is married to the Major.  She conducts her affairs with no nonsense and expects the same from others.  Most are a bit intimidated by Wanda.  Many just don't like her.  Others are thankful she takes on the roles she does so that they don't have to.  The Women's Institute plays an important role in Nether Monkslip.  It is really the only social outlet available for women.  So most of the women in the village are involved.  The Institute is in the throes of preparing for the upcoming Harvest Fayre, an annual event that is attended by everyone in the village and many from other villages.

The day of the Fayre finally arrives.  Wanda is in good form, marching around giving orders.  Anyone who can avoid her path considers themselves fortunate.  Max is milling around greeting people when he is sent to the Village Hall in search of some more tea.  On his way he crosses paths with Guy Nicholls, a chef who operates a trendy restaurant in the next village.  Guy has donated his skills as a chef to help out at the Fayre.  He asks Max if he can accompany him on his errand.  The two men fall into pleasant conversation.  Finally they arrive at the Village Hall and find the door unlocked.  They enter and begin looking for the tea wondering whether they should choose loose-leaf or bagged.  As they enter the kitchen they find Wanda prostrate on the floor.  Max can tell immediately that she is dead.  Guy begins giving mouth-to-mouth resuscitation and Max figures it is worth a try and begins compression.  Alas, they are too late.  Max's training kicks in and he begins to take in everything in the room looking for anything unusual.  He can't quite put his finger on it, but something isn't right.  Did Wanda die of natural causes or was she murdered?

My thoughts:  On most trips to the library, I look for books contained on the many lists of recommended books that I keep in the notes app on my phone.  This particular time, I was in a more serendipitous mood and was browsing the shelves.  I came across this book and was immediately taken in by the cover.  We all know you can't judge a book by its cover, so I began to read the summary and the praise for the book on the back cover, many written by authors I know.  I noticed the village maps inside the front cover, the contents page containing chapters with interesting titles and the cast of characters page, which are all things I love in a book. I decided to give it a try and I am so glad I did!  It was a delight to read.

I found myself laughing out loud several times.  The author's descriptions were hilarious.  The characters are interesting and well fleshed out.  Of course we get to know Max the most and it was fascinating to learn a little about his time in MI-5 and why he left.  We also get a glimpse into why he chose to become an Anglican priest.  When the story opens, he is preparing his sermon for Sunday from the book of James.  Specifically the two kinds of wisdom.  This gave an interesting depth to the story.

"The topic, James and the two kinds of wisdom, was more than normally appropriate, had he but known it: the one kind of wisdom - pure, peaceable, and gentle - came from above, but the other was earthly, unspiritual, and devilish.  'You want something and do not have it; so you commit murder.'"

The village of Nether-Monkslip is a character as well.  It contains a lot of history and there is an entire chapter devoted to it.  The author's descriptions are wonderful and combined with the map of the village in the front cover, give the reader a real sense of the place.

"The village of Nether-Monkslip nestled with its narrow river beneath a high ridge called Hawk Crest.  A steep and winding path led to the brow of this promontory, which was the site of the gap-toothed remains of an ancient stone circle.  A visitor on first reaching the top of the Crest, as villagers called it, and seeing the village below, might catch his or her breath in wonder that anything so pristine could have survived into the twenty-first century."

The murder was interesting and the suspects many.  Almost everyone who knew Wanda disliked her or had been wronged by her in some way.  But even so, not one of them seems capable of committing murder.  As is often the case, there were many secrets to uncover.

The only negative for me was the use of profanity.  However, there were only three or four instances which was not enough for it to be an issue for me.  It was jarring to me because it seemed out of place, but if you know this going in you won't be as jarred as I was.

This was a thoroughly enjoyable read and I will definitely be reading more in the series.

"The cold descended like a sheer curtain that Harvest Fayre night.  The autumn sun had quickly dimmed, and the smell of burning firewood now floated over the village in a pine-scented cloud."

"In direct contrast with Cotton, Musteile instantly had provoked Max's instinctive dislike.  Not because he was dishonest - well, not precisely dishonest.  He was probably incorruptible, in fact: a Mr. Law-and-Order of the type frequently drawn to the armed forces or law enforcement.  He was ramrod straight, unyielding, unimaginative.  Profoundly stupid, in fact.   A man who followed the rules, and asked no questions as to whether each rule really applied in every situation.  Respectable, moral - indeed, holier-than-thou.  A bit of a bully, especially when cornered.  A dangerous man in every way."