Book Review: On a Coastal Breeze by Suzanne Woods Fisher 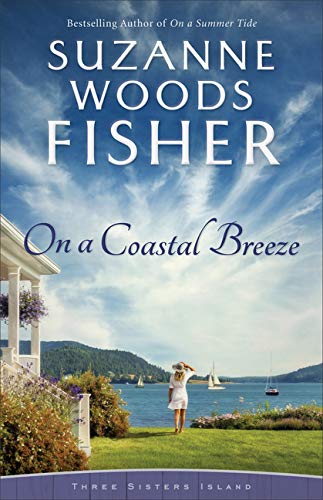 First Line:  "Just before Maddie unlocked the door to her office, she straightened the name plaque on the wall:  Madison Grayson, Marriage and Family Therapist."

Summary:  This is the second book in the Three Sisters Island series.  Maddie Grayson, middle sister in the Grayson family, is feeling good about where life has taken her.  She has made the move to live on Three Sisters Island along with her dad and her two sisters.  Her career is finally taking off.  She now has an office of her own.  But just when she thinks things are going well, the new pastor drops in.  Literally.

Richard O'Shea makes his entrance to the island by parachuting out of an airplane.  Maddie has been so focused on getting her office up and running that she hasn't paid much attention to who the town has hired to be their new pastor.  When she hears his name, she wonders if he is related to the Ricky O'Shea that she went to school with.  It turns out he is not related, he IS Ricky O'Shea.  She wonders when Ricky became a pastor.  How did that even happen.  He spent most of their childhood making things miserable for Maddie.  She is not ready to accept him as a pastor.  But everyone else on the island seems impressed by him, even her dad.  She will try to give him a chance.  But will she ever be able to see past the anxiety he caused her?

My thoughts:  The setting is an island off the coast of Maine.  It is beautiful and interesting with a small town feel.  There is a lighthouse, a beautiful church and a cafe.  The Never Late Ferry runs from the mainland to the island regularly.  Maddie's dad purchased Camp Kicking Moose and has been remodeling the cabins to get it ready for the summer.

This story focuses on Maddie, the middle sister as she starts her counseling practice and deals with Ricky O'Shea turning up on the island as pastor.  But, there are other storylines that are progressing as well.

Cam, the oldest sister, is working on writing a proposal to get a grant for renewable energy on the island.  She is engaged to Seth, the school teacher, but they have not yet set a date for their wedding.

Blaine, the youngest sister, is coming over for the summer break.  She has been attending culinary school.  But, she is not herself.  She feels like she needs to take a break from school and travel to attempt to "find herself".

Paul, the father of the Grayson girls, is gearing up for the second summer of campers at Camp Kicking Moose.

One of the themes in the book is fear.  Several of the characters are dealing with fear in one form or another.  This is something that Pastor Rick has dealt with in a big way in his life and is able to counsel others and help them identify their fears and attempt to work through them.  I appreciated this aspect and how it was dealt with Biblically.

I liked the story well enough, but I didn't love it.  I am not sure exactly why.  Perhaps my reading tastes are changing?  I felt the same way after reading the first book in the series and was undecided whether I would continue with the series.  When I saw the book on the shelf at the library I decided to give it a try.