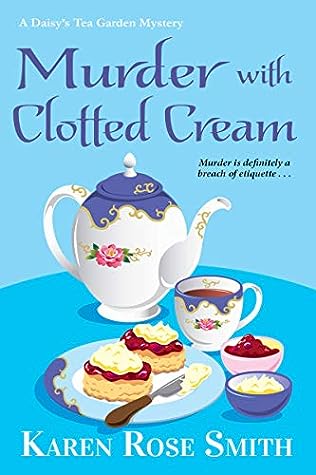 First Line: "'But what if Margaret doesn't like the apple gingerbread with clotted cream?' Aunt Iris asked Daisy as they stood t the sales counter of Daisy's Tea Garden."

Summary:  Former actress Margaret Vaughn has hired Daisy to host a tea at her home for cast members of an upcoming play.  Margaret is particular and has insisted on genuine clotted cream to be served at her tea.  Genuine clotted cream is a lot of work, but business is slow at the tea garden in early November, so Daisy was willing to take the job.

Margaret and her husband live in a beautiful, historic house surrounded by two acres of land.  There has been some discord between the actors so Daisy is not sure how the day will go.  As she and her helpers serve the first course, guests seem to relax and enjoy themselves.  When it is time to serve dessert, Daisy finds that several of the guests have left the table.  One to stretch her back, one to get fresh air, one to smoke, one to explore the library.  Margaret insists that Daisy should go ahead and serve the dessert.  As she is doing so Margaret gets a phone call and excuses herself.  Daisy soon returns to the kitchen to get the clotted cream and finds the door to the butler's pantry closed.  She knocks and gets no answer, so she opens the door.  She is shocked to find Margaret laying dead on the floor with blood and clotted cream on her chest.  The sight is so shocking that Daisy realizes, "she could never use clotted cream again..."

My thoughts:  Daisy's Tea Garden series is one of my favorites.  A really good cozy mystery combines an interesting mystery with continuing story lines of characters you love.  This book did that perfectly.

One of the things I appreciate about Karen Rose Smith's writing is her ability to make the reader feel as though they are seeing what the character is seeing.  For example:

"After Daisy parked in the detached garage that housed two vehicles under Vi's and Foster's apartment, she walked up the path to the house.  She stared up at the multi-paned window that had once been a hay hatch, and her gaze rose higher to a smaller window that let light into the attic space."

The mystery is interesting and there are lots of secrets to uncover.  No one in town knew Margaret that well, even her sister.  Daisy is not planning to get involved in the investigation of this murder, but Margaret's husband approaches her and asks her to just "skirt around the edges" and see what she can find out.  He is the top suspect and doesn't want to end up in jail.

Some of the other story lines that are occupying much of Daisy's time and thoughts include her daughter Jazzi's desire to get to know her birth mother and husband, the birth of her first grandchild, and trying to figure out how to handle her mother's strange behavior.  Added to all this, Daisy has begun dating Jonas Groft and spends as much time with him as possible.

I also appreciate the depth in these books.  This time one of the characters is dealing with a mental health issue.  As the characters walk through this situation, the reader learns quite a bit about this particular issue.  It is handled honestly, but never gets too heavy.

This installment takes place in November and early December.  So we get to celebrate Thanksgiving with Daisy and her family which is a treat.  There are some recipes included at the end of the book as well.

I thoroughly enjoyed this installment of Daisy's Tea Garden and can't wait to spend more time with Daisy, her family and friends.