Book Review: The Children of Henry VIII by John Guy 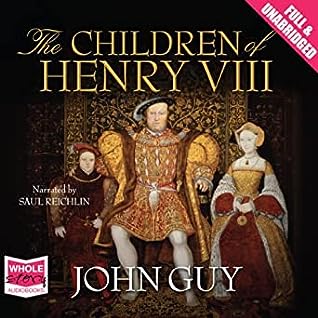 Summary:  Henry VIII was not the heir to the throne as he was the second son.  His older brother Arthur was to become King when their father, Henry VII, died.  Arthur was married at the age of 15 to Catherine, the daughter of King Ferdinand of Spain.  However, just a year later Arthur died after an illness leaving Catherine a widow.  Because of the importance of an Alliance with Spain, Henry VIII, at the age of 12, was promised to marry Catherine.  However, he did not marry her until a few months after his father's death when he had become king in 1509, seven years later.

It had been brought to Henry's attention by his advisors that the best way to safeguard the Tudor Dynasty and reinforce Henry's kingship was to produce a male heir.  Unfortunately, Catherine was unable to produce the heir Henry longed for.  She did however, give birth to a healthy baby girl named Mary, who would later become the first female monarch.  Meanwhile, Henry took on several mistresses.  One of them, Elizabeth Blount, became pregnant and gave birth to a healthy baby boy.  This convinced Henry that he was able to reproduce.  A few years later he became infatuated with Anne Boleyn.  However, Anne wasn't so easily convinced to have sexual relations with the king.  In fact, she refused unless he divorced Catherine and married her because then any child she produced would be heir to the throne.  Therefore, Henry declared that his marriage to Catherine had never been legitimate because she was his brother Arthur's wife before she was married to Henry.  After a battle of almost 6 years, Henry married Anne Boleyn.  Unfortunately she also was unable to produce a male heir.  She did give birth to a daughter who would later become Queen Elizabeth I.  When Henry had had enough of Anne he accused her of adultery.  She was convicted and beheaded.

Henry would marry four other women in his quest for an heir.  He was able to produce a male heir with his third wife, Jane Seymour.  He was named Edward and would ascend to the throne when Henry died.  Edward was only 9 years old when Henry died.  Edward died at the age of 14.  He was ill and before his death was able to draw up a "device", like a will, that shut out his half-sisters from succession and named his cousin Lady Jane Grey as his heir.  However, after nine days, Mary Tudor, the rightful heir to the throne, declared herself queen.

Mary had a fierce devotion to the Catholic faith and much of her reign was taken up with fighting to eradicate Protestantism.  Even going so far as having her half-sister, Elizabeth, thrown in the tower.  She did finally release her and Elizabeth became queen after Mary's death.

As much as Henry VIII wanted to secure the Tudor Dynasty, it would end with the death of Elizabeth.  All three of Henry's legitimate children were childless.

My thoughts:  I became interested in learning more about Henry VIII after watching the 1966 film, A Man For All Seasons.  The film is based on a play written by Robert Bolt and deals with King Henry VIII attempting to annul his marriage to Catherine and the opposition he faced.

This book was told in narrative form and was easy to follow.  The lives of the children are included when they enter in the larger story and are interwoven with the life of Henry, as well as his wives and the struggles in the kingdom at the time.  John Guy includes quotes from other literature and documents when appropriate which makes the story more interesting.  I listened to the audiobook version narrated by Saul Reichlin who has a wonderful British accent that is perfect for this book.

If you would like to learn more about the Tudor Dynasty or England in the 16th century, I recommend this book.