Book Review: The Heart of a Hero (Global Search and Rescue #2) by Susan May Warren 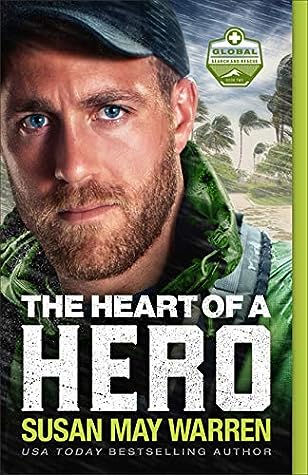 First Lines:  "In the daylight, Jake Silver wasn't the devil.  He didn't hear the screams.  Didn't smell the pungent residue of gun smoke tinging the air.  Didn't destroy lives.  In the daylight, he was just Uncle Jake, the guy who knew how to fly."

Summary:  This second installment in the Global Search and Rescue series picks up just a week after we left them in the first book.

Jake is living with his parents at their home on a lake in Minnesota.  He is not sure what his next move will be.  His friend Hamilton has started a private search and rescue company and wants Jake on his team.  To further complicate matters, he can't seem to get Dr. Aria Sinclair off his mind.  He helped rescue her and two of her friends off of Denali in Alaska.  Before leaving Alaska, Aria invited Jake to her hotel room.  This was not a good idea and when Aria's roommate walked in while they were kissing, she made all kinds of assumptions and accused Jake of taking advantage of Aria.  Jake thought it was mutual, but when Aria walks away from him without saying a word, Jake blames himself.

Dr. Aria Sinclair is glad to be back doing her job as a pediatric cardiothoracic surgeon.  She is one of the best, but after losing a patient, she blames herself.  Maybe she wasn't ready to get back to work yet.  Her boss reassures her that it wasn't her fault the patient died.  He is sending her to a conference in Florida where she will give a lecture in her field and then have several days to just relax.  She doesn't want to relax in Florida - but she is so tired, maybe it wouldn't be so bad.

After her speaking engagement, Aria goes on a snorkeling expedition with some of the other doctors.  Unfortunately, the waves on the ride home don't agree with her and she becomes very seasick.  When she gets back to her room, all she wants to do is sleep.  But first she sends a text.

When Jake reads the text Aria sent, his hope is renewed.  She says she wishes he was there.  That doesn't sound like someone who wants nothing to do with him.  He tries to call Aria to check up on her, but can't get through.  Meanwhile, there are reports of a hurricane approaching Florida.  Is Aria okay?  Why isn't she returning Jake's calls and texts?  She must be in trouble.  Jake must get to Florida.

My thoughts:  While this series is considered suspense, the threat to lives is usually the elements.  The characters in these stories take big risks and do dangerous things usually to save lives.  They have some amazing adventures while saving others and themselves.  My life is so not like this.  That is why I love these stories!

Both Aria and Jake have some baggage from their past.  They both blame themselves for things that happened to people they love.  They are both highly driven people, but in very different ways.  Jake seems to run toward trouble.  He acts and then thinks.  But he was trained for this when he was a SEAL.  He is also very tenderhearted.  He has attempted to deal with pain by having fun, making jokes and doing dangerous things.  Aria, on the other hand, has tried to make up for what she feels was her fault, by working harder, being the best, not stopping to have fun or enjoy life.  Neither way of dealing with pain is working very well.  They both grow through the literal storm that God brings into their lives.

In addition to the main story line dealing with Jake and Aria, there is a secondary story line that has spanned several books.  Susan May Warren has a knack for bringing characters from other series into a story.  The secondary story line involves Hamilton Jones.  He has just recently learned that he has a daughter who survived a yacht fire in Italy.  He thought his wife was dead, but recently discovered that she was still alive.  However, she never told him she had a child.  Hamilton has hopes that she is still alive, so while on business in Europe he does some investigating.  We are left with a cliffhanger regarding this part of the plot.

There are several new characters introduced through the hurricane.  Several of these were interesting and I hope to see them in future books.

The description of the hurricane was incredible.  This is not something I have ever been through, but I felt like I had after reading this.

"Outside their tiny spiritual enclave Lucy tore at the building.  It shuddered, and with it, the wind moaned, haunting the hallways with shrieks and wails.

She wanted to press her hands over her ears.

Glass shattered all over the building, tearing at the metal frames.  Rain pounded the building, the storm surge outside rising and falling with what sounded like great gulps of destruction."

If you are looking for an edge-of-your-seat read, full of adventure and bravery, I highly recommend this book.  However, if you have not read the first book in the series, The Way of the Brave, I recommend you start there.

Email ThisBlogThis!Share to TwitterShare to FacebookShare to Pinterest
Labels: 52 Books in 52 weeks, read in 2020, Suspense